How Are Muay Thai Fighters Ranked?

Belts are the accepted status of rank in martial arts like Karate and Judo. These belts are different colors and indicate what level of competence you have obtained. Through examinations and standard assessments, you can climb the colored ladder of belts, with black being the highest level.

Muay Thai fighters don’t associate rank with their art form. They practice the tradition of letting your fight record speak for itself.  Muay Thai fighters are working toward championship belts, not colored belts.

Ranking a Muay Thai fighter is based on their fight record, how many wins, how many championships, level of skill, and quality of the fight.

Today, the World Thai Boxing Association is developing a ranking system that uses armbands, not belts.

You can see an example of these armbands worn by one of Thailand’s top Muay Thai fighters, Buakaw, in this video:

What Do The Armbands Represent?

We now know that Muay Thai fighters don’t use a belt ranking system, but you might have seen different colored armbands on fighters as they enter the ring. What do these armbands represent?

Armbands are the brainchild of the World Thai Boxing Association (WTBA). They use colors ranging from white to black to gold. Each color represents what level a Muay Thai fighter is at, just like the belt colors in other martial art forms like BJJ or Kung Fu.

The armband system is still in its infancy. It can be done correctly, but there are kinks to work out. Questions regarding how long one has to train to achieve a higher rank and how to “test” fighters for competency still have yet to be answered.

Why Does Muay Thai Use Armbands and Not Belts?

You may be thinking that if all other forms of martial arts use colored belts, why would Muay Thai fighters use armbands. There is a history associated with the armband that keeps the traditions of Muay Thai alive.

The armband is called a praciat or prajead. In ancient times, mothers bid their sons farewell to war by giving them a woven piece of their skirt. The pieces of fabric often had prayers or spells written on them to offer protection in battle.

Now, receiving an armband is a sacred event. Fighters only get the praciat when the instructor permits them to enter the ring. A local monk or teacher would present the sacred armband to the fighter. The praciat is usually red, and its purpose is to protect the warrior in battle and give him the courage to keep fighting.

Receiving a praciat has no bearing on rank. It is a sacred symbol and something all fighters desire to receive, as the belief is that a praciat made by an instructor and given to their student brings more power.

Why Do Fighters Practice Muay Thai if They Can’t Move Up the Ranks?

Muay Thai is not about ranking. If a fighter chooses to train in Muay Thai, it is for other reasons. One reason is to earn a living. In Thailand, Muay Thai is a professional combat sport, much like boxing is in the USA.

Muay Thai fighters can only enter the ring once their teacher says they are ready. Just because they win a fight doesn’t mean they have gained a higher status. Thai fighters are only ranked by how well they fight and the skills shown when they fight.

For martial arts fighters, receiving that belt or symbol of rank is important. For Muay Thai fighters, it’s not. They know that they gain status and rank by how well they fight. It is all about winning a match with skill, not passing an examination. This ranking system gives pride to the fighter, which traditionally is more important than a colored belt.

One of the top Muay Thai fighters, Saenchai, has won several Lumpinee titles based on his unique skills. His style of combat is unmistakable due to the risky moves he is able to achieve over other fighters. You can see an example of his incredible talent in this video:

The Future of Muay Thai and its Ranking System

As time progresses, so does the martial arts world. The art of Muay Thai is steeped in tradition. Even so, they have not been untouched by the progression of combat sports and martial arts around the world.

Within the borders of Thailand, Muay Thai has been kept sheltered. Fighters and teachers still adhere to the traditions and roots of this art. Muay Thai fighters honor and respect the history of Thailand. These fighters are showing honor to their families and respecting the importance of Muay Thai to their existence.

They recognize that long before Muay Thai was a sport, it was a survival skill. Farmers would use the skills taught in Muay Thai to protect their land, and soldiers used them on the battlefield.

Many fighters today still come from the poorest regions of Thailand. The reason for this is that low-income families see this as the only way out for their sons. It is an opportunity for them to make a living and support themselves and their families.

Today, we find Muay Thai being practiced all over the world. Avid MMA fans and athletes are learning how the art of Muay Thai not only helps them in the boxing ring but teaches humility, perseverance, and respect.

There are Muay Thai schools in almost every state of the U.S. Muay Thai may look a little different in the U.S. than it does in Thailand, but it is still gaining in popularity.

Americans and other nationalities commonly travel to Thailand just to train with traditional Muay Thai instructors, and though they may not earn a rank, they earn the discipline and skill that is taught in this artform. Does Muay Thai have a belt ranking system? The answer is no, and because of tradition, it probably never will, but there is something to be respected in that.

The art of Muay Thai is rooted deeply in Thailand’s history and offers something different to those who practice it.

Muay Thai will not help you claim a belt of many colors. It will help you obtain honor, pride, humility, and strength. To climb Muay Thai’s ranks, you must prove yourself in and out of the boxing ring. 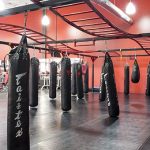 The 12 Best Heavy Bags for Boxing and Muay Thai