The truth is, size does matter in a fight. If you ever find yourself in an altercation with an opponent who is taller or weighs more, it’s recommended to employ the best strategies to overcome their size advantage. Almost all fights start standing up which is good thing, because the last thing you want to do is grapple with your opponent if they’re bigger than you (unless you have high level Brazilian Jiu Jitsu).

I understand this type of situation can be very intimidating, especially when you’ve never been in a fight before. Growing up I was always the small kid out of my friend group, which means every fight I was in was with someone much larger than me. Not only did this help me become better at fighting, but it also taught me how to use my size as an advantage. If you’ve never been in a fight before, I recommend looking at our article on how to win a street fight.

I think this goes without saying, however don’t fight unless you have to. When faced with a bigger opponent, you’re going to be at a disadvantage from the start. Unless there’s truly no other option, try to defuse or avoid physical violence at all costs. No matter how confident you feel that you can take your opponent, it’s always best to avoid a fight if possible.

I always find that it’s best to make peace or simply walk away, if you can. There is no shame in running from a fight, I’ve done it once or twice. Your opponent may be carrying a concealed weapon, or have friends lying in wait to gang up on you. The primary goal should be getting yourself out of harm’s way. Fighting can be especially dangerous when the opponent is a random stranger being aggressive towards you.

When an attacker comes into striking range with you, the worst thing you can do is let your guard down. It’s always important to watch your opponents body language, if they clinch their fist, they’re most likely preparing to punch you. I recommend keeping a good distance while talking to your opponent, staying out of striking range while they are still being aggressive. Remember, your opponent could be on drugs or could possible have a weapon.

Keep your hands up to defend your head at all times. Your forearms should be held vertical and parallel, with palms turned inward toward your cheeks. Squeeze your fists together lightly until you’re ready to throw a counterpunch. Hunch slightly to bring your elbows down closer to your midsection to protect your ribs and abdomen from body blows.

Remember to never overextend when throwing punches. Never put your entire weight behind a punch, this will leave you open to being counter punched. It’s good to know at least some basic boxing skills before going into a fight.

Reasons why this is a good fighting stance:
– Hands are up and alert, always stay active with your hands, never let your guard down in a street fight.
– Proper foot position. It doesn’t matter if you stand with your right foot first (southpaw) or your left foot first (orthodox), however always make sure that your rear foot is at a 45 degree angle, and at a good space from your front foot. (around shoulder length apart)
– Chin tucked! This is so important, keeping your chin high in the air will leave you susceptible to getting knocked out.
– Not too much weight on either foot, this allows you to move in any direction at the drop of a hat.
– Head facing straight and forward, eyes wide and alert. I always recommend being aware of not only your opponent, but also the other people around you.

Believe it or not, we’re completely serious. If you believe a situation has escalated to the point of no return, throw the first punch, especially if your opponent is bigger than you. The best advantage you can give yourself is ending a fight before your opponent even gets a chance to react. Throwing a punch that lands clean will possibly rock your opponent, or at minimum create the opportunity to throw more punches.

Once you have the advantage, don’t let up until you sense there is no more danger. This DOES NOT mean continue punching an unconscious opponent. Remember to always escape a situation if that’s an option. If you knock out or choke out your opponent, get up and stop attacking them. Continuing to punch or choke an unconscious opponent can lead to serious brain damage, or even death.

In our how to win a street fight article I recommended grappling with your opponent, however this is something I tend to stay away from when fighting a bigger opponent. Unless you have good grappling from previous wrestling or Jiu Jitsu experience, I highly recommend staying on your feet if possible.

Use Your Small Size to Your Advantage

I know being the smaller person in a fight seems like a disadvantage, and it is, however you can also use your small use to your advantage. Moving constantly to keep a larger opponent from grappling with you or landing strikes will make them tire out faster. Always stay light and equally balanced so that you can move around quickly, which will also keep your opponent guessing. Chances are your opponents reach is longer than yours so stay safely outside of it until you’re ready to move in and counter with a strike.

Brazilian Jiu Jitsu is a particularly useful martial art for fighting bigger opponents. Anyone who has watched the early UFC’s will know this of course, when Royce Gracie used his BJJ techniques to completely demolish larger fighters in MMA.

One of the best “small guy” BJJ fighters of all time is Bruno Malfacine, who is one of the owners and instructors at BJJ Fanatics, a top online Jiu Jitsu training site. If you want to learn how to use JIu Jitsu specifically against bigger opponents, the best course out there is his How To Beat Bigger Guys video collection:

Since legs are longer than the arms, becoming proficient at kicking can help overcome your opponent’s reach advantage. I’ve personally used Muay Thai techniques to my advantage once or twice. This means throwing low kicks and front teeps which helped keep my opponent at bay. Muay Thai has great defensive techniques that I highly recommend learning. Don’t be afraid to throw a palm strike to your opponents chin (if you’re afraid of breaking your hands with a traditional punch).

The LAST thing you want to do is allow your opponent to get his hands around you, this can result in a take down or even worse a submission. The trick is to allow yourself enough space so that you can use your small size and quick speed to get in close when the time is right.

Don’t be Afraid to get Dirty

A street fight involves no rules, which means this can be a dangerous situation to be in. You don’t know how badly you might be injured if you come out on the losing end of a fight, so you shouldn’t be discouraged from being vicious. If you’ve been forced into a corner, don’t be afraid to: bite, gouge eyes, pull hair, chop the throat, bend fingers back, knee the groin or anything else you have to do to survive.

I usually don’t fight dirty myself, however you need to be aware of the possible dangers in a street fight. You never know if your opponent is on drugs or if they’re concealing a weapon such as a knife or gun. This is especially true if you’re in a “bar fight” type of situation, you never know how dangerous your opponent is in this type of situation, or if they have friends willing to fight dirty.

Hit Them Where it Hurts

Unlike an MMA match which has regulations about where you’re allowed to hit an opponent, all bets are off in a real fight. I recommend to target the most delicate areas of your opponent’s body to make every strike count. One perfectly-placed blow is all you’ll need to put a bigger opponent out of commission. Most people won’t be expecting these types of attacks, so they’ll be left without a ready defense.

Strikes that target an opponent’s sensory organs (liver strike) will leave them temporarily stunned, enabling you to get away or follow up with a hard hit. An open hand slap to the ear is just as good as a left hook for shattering an opponent’s equilibrium, if not better (this will also lower the chance of breaking your hand). Hitting the nose with a palm strike can blind them momentarily by causing their eyes to well up with tears, which gives you an opportunity to throw a fight-ending punch. A kick to the groin will compromise their mobility and instantly take the will to fight out of them.

If you’re in a situation where you get taken down to the ground by a bigger opponent, don’t be afraid to go for a submission if you can’t get up. I highly recommend doing whatever it takes to get back to a standing position (eye gauge, hair pull, whatever). It doesn’t make you any less of a person, always do what you gotta do to win a fight.

One resource you might want to check out for fighting bigger opponents is Fernando Salvador’s “How to Beat the Big Guy” program. Prof Salvador is a 3rd degree black belt under BJJ legend Pedro Sauer. More importantly though, he’s only 5’3″ and 120lbs yet has an incredible MMA and Jiu Jitsu record (2x Chaos in the Cage Champion, Casca Grossa Champion, won NoGi Pans in 2009, etc).

This program contains a ton of videos where Prof Salvador breaks down the techniques that have helped him defeat larger opponents. In particular, his unique holding a plate stance is really useful for keeping a strong base against a bigger opponent.

Learn To “Beat the Big Guy”

The most common submission is the rear naked choke because it’s quick and effective. When you have your opponents back it just happens to be the perfect position to choke them. No matter how big or tough someone is, they won’t be able to hurt you if they’re unconscious.

Video example explaining the steps of a rear naked choke:

After the Fight is Over

Be respectful after the fight is over, while also being aware of any other possible attackers, especially if the person you just fought isn’t alone. If you win the fight and your opponent is with friends, those friends might want a round two (or some sort of redemption for their friend). You always need to keep your guard up before, during, and immediately after a street fight. 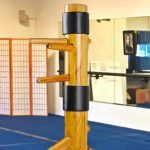 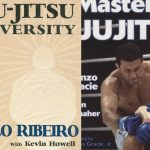