One of the most common and sought-after chokehold positions, the Ezekiel Choke is a relatively simple technique and a popular go-to for most BJJ and MMA fighters.

Ezekiel Choke essentially compresses your opponent’s trachea and carotid arteries. In Japanese, it is known as the Sode Guruma Jime, which means “sleeve wheel constriction.”

Traditionally, in its execution, you would wrap one arm behind your opponent’s head while grabbing onto the gi’s sleeve with the other. You want to hold onto the sleeve for leverage and bring down the opposite forearm across your now mounted opponent’s throat, cinching it tightly.

History of the Ezekiel Choke

The choke rose to prominence and got its namesake from Brazilian judoka Ezequiel Paraguassu from when he trained in Copacabana, Rio de Janeiro 1988. At the time, Paraguassu was preparing at Carlson Gracie’s gym for the 1988 Olympics in South Korea.

While in training there, Paraguassu was in the presence of the world’s best jiu-jitsu fighters — some of whom were a bit too proud to stand with him.

Paraguassu says, “There was a rivalry in the beginning, but then they accepted me there. I found what I was looking for. Every training practice was like a real competition there, and that’s exactly what I needed as I prepared for the Olympics.”

During his training, Paraguassu found it difficult to escape his opponents’ closed guards. Frustrated, he eventually began to utilize what would soon become his signature technique to submit most of his opponents this way.

Other fighters at the gym were in awe of his execution and often asked Paraguassu to teach them the technique. At that point, it was commonly referred to as the Ezekiel Choke.

Mechanics of the Ezekiel Choke

This choke relies heavily on the leverage you attain by gripping the gi’s sleeve, so it needs to be slightly adjusted to execute it without a gi. Most fighters do this by using their bottom arm to grip the opposite forearm or elbow.

Alternatively, you can also use the fist or wrist rather than the forearm. These days, the Ezekiel choke is most often set up from the mount and also the top of half guard.

The choke has kind of a dual power. It can work as a blood choke or an air choke, depending on how you place your palm and the direction of which you apply force. It’s super important to tap quickly with this choke.

Setting up the Ezekiel choke means you need to have one arm under your opponent’s head. Typically, this is accomplished while rolling. This way, you won’t have to be specifically setting up and, as a result, run the risk of telegraphing your choke.

Using the arm that’s underneath the head, sneak four fingers deep inside the opposite sleeve of your gi. Your fingers should be going deep into your sleeve — once you’re in, get a firm grip inside it.

Now, we get into the actual choke. At this point, you want to place the palm of your free hand under your opponent’s chin. This is where it can get tricky as many fighters typically try to use an open hand. Instead, you want to keep your fingers bent so your hand becomes compact and can sneak in more easily.

By now, you’ll be ready to finish. Carefully slide both of your arms to the side and bring the second hand deeper across your opponent’s throat. Quickly extend your top arm to remove any space that will get you easy taps.

When it comes to the Ezekiel Choke, you’ve got a couple of options to go about execution. You can go in from the mouth, side, or inside your opponent’s guard, among others. Paraguassu himself preferred to catch it from the back.

Ezekiel Choke from the Mount

Most fighters tend to go for this position to finish the Ezekiel Choke, especially because of how devastatingly entertaining it gets.

With this method, while in mount, you’ll need to secure one arm around your mounted opponent’s head. With their secured arm, they will try to grab the free arm’s sleeve.

While holding the sleeve, your free arm should come across the front of the throat while in a mounted position. You would finish by pushing away, producing a scissoring action, and cinching the choke tightly across their neck.

As we mentioned earlier, the Ezekiel Choke is often performed without using a gi with subtle variations. What’s key with this option is when finishing the choke, use your hand placement to create a pivot.

In executing this method, Paraguassu suggests grasping the bicep allowing you sufficient movement to pivot your arm to the front of your opponent’s throat. If your opponent starts to roll out of the position, it’s an excellent opportunity to transition to the Darce Choke.

When you’re in the position of the opponent, the best defense for the Ezekiel Choke is to ensure you recognize all these positions and movements as the other fighter presents them.

Should you end up in a mount with your head trapped, you’ll need to defend against the second hand that will be coming across your throat. The motion towards your throat is your biggest threat in the Ezekiel choke. But its effectiveness lies in being applied with a pushing force rather than a pulling force like other chokeholds.

It’s a challenging choke simply because the more you try to push, the faster you’ll go out.

Despite its effectiveness, the Ezekiel Choke isn’t often given a chance to be used as a finisher. However, many fighters have famously and successfully used the technique in battle.

The Ezekiel was executed successfully by Yoshida in an MMA competition with the sode guruma jime during the Pride Total Elimination of 2003.

With the sode guruma jime, Akiyama defeated Shibata during the final round of Dream 5, the Lightweight Grand Prix of 2008.

Staniszewski used the no-gi version of the Ezekiel Choke against Hannan in the Pan Jiu-Jitsu Championship finals. Staniszewski also used the Ezekiel to defeat Nicholas Gohn at the World Team trials and the USA Judo Nationals, allowing him to advance to the medal round.

In 2012, Staniszewski’s Ezekiel came through with the choke yet again, defeating Stanley at the Starrett Cup International.

To date, Oleinik has won 14 fights via the Ezekiel Choke, most notably during his fight against Pesta at UFC Fight Night 103 in 2017. This earned him not only the winning title but the first fighter in UFC to ever win using the Ezekiel Choke.

In 2018, Oleinik wins again against Albini at UfC 224 in Brazil using the choke despite Albini specifically training in its defense.

No matter what method you choose, gi or no-gi, the Ezekiel Choke is one of the most effective and fairly simple gems to apply in an MMA or BJJ fight.

Learning how to execute it correctly and effectively can be done in only a few training sessions. Its prominence occurred out of chance by Parraguassu, so you know you’ve got nothing to lose! Now that you’ve learned about the Ezekiel choke, check out my posts on the Rear Naked Choke and the Darce Choke. 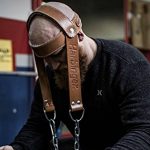 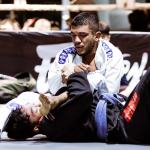