Combat sports is an inherently dangerous activity. With thousands of fights taking place every year, injuries are an inevitability. And sadly, there have been many fighters who have died from competing in their sport. In boxing alone, there have been at least 500 deaths since the modern form of the sport first emerged.

While boxing deaths and MMA deaths are statistically rare, they are a reality that all fans and fighters should acknowledge. These are truly deadly martial arts. Stepping into the ring or cage takes bravery, and for many combatants, it is one of the only viable ways for them to make a living.

Let’s never forget that the fighters who compete for our entertainment are quite literally risking their lives with each competition. With that in mind, let’s uncover some of the most tragic deaths that have taken place in combat sports.

18 Fighters Who Died in the Ring

Though the topic implies that these following fighters died inside the ring, in many cases, they met their demise hours or days later. But one common factor remains the same. For each of these fighters, it was damage sustained during a competition that caused them to pass away.

To drive home the point that boxing deaths are a very real concern, let’s begin with a recent in-ring death. The then 27-year-old American boxer Patrick Day suffered a knockout loss to Charles Conwell.

While the knockout was devastating, it did not appear abnormal until it became apparent that Day was not waking up. The medical team quickly took Day out of the arena on a stretcher.

Day entered a coma and received and underwent emergency brain surgery. The surgery was not successful as Day passed away. Stephen A. Smith had fight promoter Bob Arum from Top Rank Boxing on his talk show to discuss this tragic turn of events:

Though Conwall was celebratory at the moment, he was unaware of the severity of the knockout and later publicly expressed his remorse to Day and his family in an open letter.

Becky Zerlentes holds the unfortunate distinction as the first female fighter to die during a sanctioned boxing match. While fighting in an amateur bout in Denver, Colorado, Zerlentes took a blow to the head that set her into unconsciousness.

Zerlentes never regained consciousness and died at the age of 34. The official cause of death was blunt force trauma to the head.

Boxing is far from the only life-threatening combat sport as Mixed Martial Arts has also claimed several lives. The first death in an American MMA fight took place in 2007. Since then, there have been 16 total deaths resulting from MMA competition.

Sam Vasquez lost via third-round knockout to Vince Libardi in a bout held in Houston, Texas. Vasquez fell to the floor after the fight as a result of a subdural hemorrhage.

Doctors removed a portion of Vasquez’s skull to relieve the pressure on his brain. But their efforts were to no avail as Vasquez entered a coma and died a few days later.

Of all the entries on this list, this is perhaps the most eerie. In 1947, Jimmy Doyle faced Sugar Ray Robinson, a man who would later gain recognition as one of the best boxers of all time.

Strangely enough, the fight almost never happened. Robinson initially turned down the fight after having a dream that he would kill Doyle in the ring.

But the fight went on regardless. After an eight-round knockout, Doyle died just hours later in a nearby hospital.

Many boxing deaths occur after the bout is over as the boxer receives medical attention. But this was not the case for Brad Rone.

After receiving several punches, Rone suddenly dropped to the canvas. Officials later revealed that one of those punches causes a heart attack.

Rone never reached the highest levels of boxing competition. But the sport gave him a chance to earn a living and train with some famous fighters like Mike Tyson and Lennox Lewis.

In 1930, Frankie Campbell stepped into the ring against Max Baer. Though Baer would go on to be a very successful champion, Campbell had success early in the fight.

In the second round, Campbell knocked Baer down. But unbeknownst to Campbell, the referee ruled that Baer had slipped. That allowed Baer to rise to his feet and approach Campbell, while Campbell believed that the ref was giving Baer a ten count.

With Campbell’s back turned, Baer landed a heavy blow to the chin. Campbell was able to continue fighting but told his cornermen that he felt that something inside his head had broken.

Indeed, something had broken in Campbell’s head. He later lost the fight by knockout and died of a cerebral hemorrhage.

Michael Kirkham made his professional MMA debut at the age of 30. But few could have predicted that it would be the last fight of his life.

After the 2010 fight, Kirkham collapsed. As a result of the fight, he had severe bleeding in his brain and died in the hospital.

Oddly enough, Korean boxing champion Choi Yo-sam died after a fight he won. In 2007, Yo-sam successfully defended his title by a unanimous decision, but the fatal damage was already done.

Although he won most of the fight, Yo-sam took a severe beating in the final round. With seconds left, his opponent knocked him down. Only the bell prevented Yo-sam from losing by knockout.

After his collapse, medics brought Yo-sam to the hospital, where he became brain dead. After the decision to remove him from his ventilator, Yo-sam passed away the next day.

Pedro Alcazar’s death was one of the most unexpected in boxing history. After losing to Fernando Montiel, the Panamanian boxer appeared to be in relatively good condition.

But less than two days later, laid dead in his hotel room. The cause of his death was the blows he took during the fight.

Davey Moore fought Sugar Ramos in 1963. After a contentious battle, Ramos knocked Moore down in the tenth round.

When Moore fell, his neck landed on the bottom rope. The landing looked painful, but Moore was able to continue fighting and finish the round.

But shortly after the round ended, the referee ended the fight. In his changing room, Moore fell into a coma. He died just over three days later.

In December of 2011, Roman Simakov fought the well-known Russian boxer Sergey Kovalev. During the fight, Simadov suffered brain damage that later caused him to pass away.

Few people were more affected by this death than Kovalev, who blamed himself for Simakov’s passing despite fighting within the rules. Kovalev remained hesitant to address the incident and attempted to help Simakov’s family after the death.

Leavander Johnson was a championship-caliber fighter, having won the International Boxing Federation world title from Stefano Zoff. But his very first title defense proved to be his last.

Although Johnson lost by technical knockout to Jesus Chavez, he had no problem walking back to his dressing room under his own power. But a few moments later, he fell to the ground.

Johnson had a subdural hematoma that needed immediate medical attention. In the hospital, doctors worked tirelessly to save him. They placed Johnson in a medically-induced coma.

Initially, Johnson’s condition appeared to be improving. He survived for over a week in the coma but eventually succumbed to his injuries.

Christian Daghio fought in boxing and mixed martial arts in his lifetime. But it is the former activity that eventually took his life.

At the age of 49, Daghio lost by knockout to Don Parueang in the 12th round of a title fight. As is the case with many boxing deaths, Daghio entered a coma from which he never returned.

Daghio dreamed of fighting into his old age. In his lifetime, he competed in hundreds of fights in both boxing and Muay Thai.

Daniel Aguillion was a professional boxer who died while fighting against Alejandro Sanabria. In the final round of a championship bout held in Mexico, Sanabria landed a clean punch to Aguillion’s jaw.

The punch was so powerful that Aguillion never recovered even after receiving medical treatment. Aguillion was only 24 years old when he died, and the World Boxing Council has since offered financial support to his family.

Muay Thai fighter Anucha Thasako was just 13 years old when he died. As is common in Thailand, many children compete in Thai boxing from a young age.

It is typical for young fighters to have many fights even before they become teenagers. This was the case with Thasako, who had more than 170 total fights in his life.

Thasako was competing in a charity bout when he lost via knockout. The knockout caused a brain hemorrhage that killed him two days later.

Rondel Clark was an amateur MMA fighter who lost a bout by technical knockout in 2017. Three days after what was just his second fight, Clark was dead.

Unlike other fighters on this list, Clark’s death was not solely the result of the damage he took in the fight. Instead, his effort to cut weight prior to the fight was the culprit.

In an attempt to compete in a specific weight class, it is common for a fighter to dehydrate themselves before a fight. Dehydration is dangerous in general and is especially concerning in combat sports.

Due to dehydration, Clark’s kidneys failed along with bodily symptoms. Clark’s family has since established a foundation with the goal of ending extreme weight cutting in MMA.

Benjamin Flores fought Al Seeger in 2009 and lost via referee stoppage. After the fight, he was hospitalized in a facility near the arena.

Flores suffered significant injuries during the fight that doctors were unable to remedy. After five days, he met his untimely death at the age of 25 years old.

Flores was originally from Mexico and traveled to the United States with the goal of becoming an olympian. After that dream did not come to fruition, he became a professional boxer. He amassed an admirable 19-4 record before his passing.

Four days after losing by knockout in the 14th round of his fight against Ray Mancini, Kim Duk-koo died while in a coma. But his death was not in vain.

Duk-koo’s death brought the safety of boxing into question. One concern was the 15 round length of a championship fight. With the recent death in mind, boxing regulators changed that length to 12 rounds.

Boxing remains dangerous for any length of time. But what happened to Duk-kim prompted at least one reform aimed at reducing the risk of fighter death.

Be Careful and Pay Respect

Competing in boxing and MMA implies a serious health risk. And at times, fighters pay the ultimate price for pursuing the sport they love.

If you are a fan or fighter, remember what is at stake in every fight. Fighters must know that death is always a possibility in their sport. But they face that risk with courage anyway. For that, they deserve the ultimate level of respect. 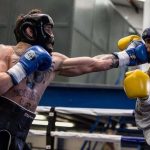 Ultimate Guide to the Best MMA and Boxing Headgear