If you know anything about Mixed Martial Arts, you also know that having good Muay Thai technique is a huge component to being successful. Not all professional MMA fighters in the UFC use Muay Thai, however some of the best fighters are master Muay Thai strikers. Muay Thai was the first Martial Art that I learned and I absolutely fell in love with it. My biggest influences were Muay Thai fighters like Saenchai and Buakaw, I also looked up to MMA fighters like Edson Barboza and Donald Cerrone.

I don’t want to sound like I’m biased towards Muay Thai as the “ultimate” martial art for MMA. I actually have an article detailing the best fighting styles for MMA and Muay Thai isn’t the only Martial Art highlighted on that list. I also love various other Martial Arts like Brazilian Jiu Jitsu, Tae Kwon Do, and many more. To be a true Mixed Martial Artist you need to be proficient in many different fighting styles in order to be a well-rounded fighter. I love to watch MMA fighters compete, no matter if they train in Muay Thai or not. I love MMA because I get to see how people use their cultural backgrounds and unique styles to defeat their opponent in the octagon. 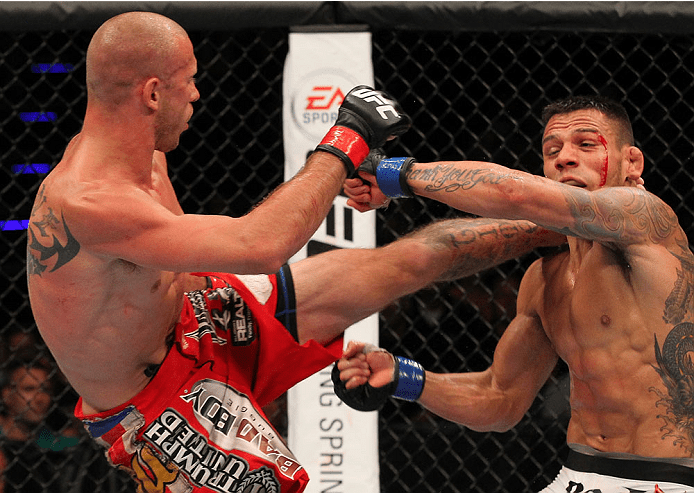 I would be lying if I said Donald “Cowboy” Cerrone wasn’t one of my favorite fighters on this list. The reason why he’s one of my favorite fighters is that he’s willing to stand and trade with the best of them. Although he’s also a black belt in Brazilian Jiu Jitsu, he rarely uses his grappling skills as his main weapon. Cowboy has been known to have a vicious switch-kick technique which is textbook Muay Thai. I believe Donald Cerrone is one of the best Muay Thai fighters in MMA today because he stays true to his Muay Thai roots. 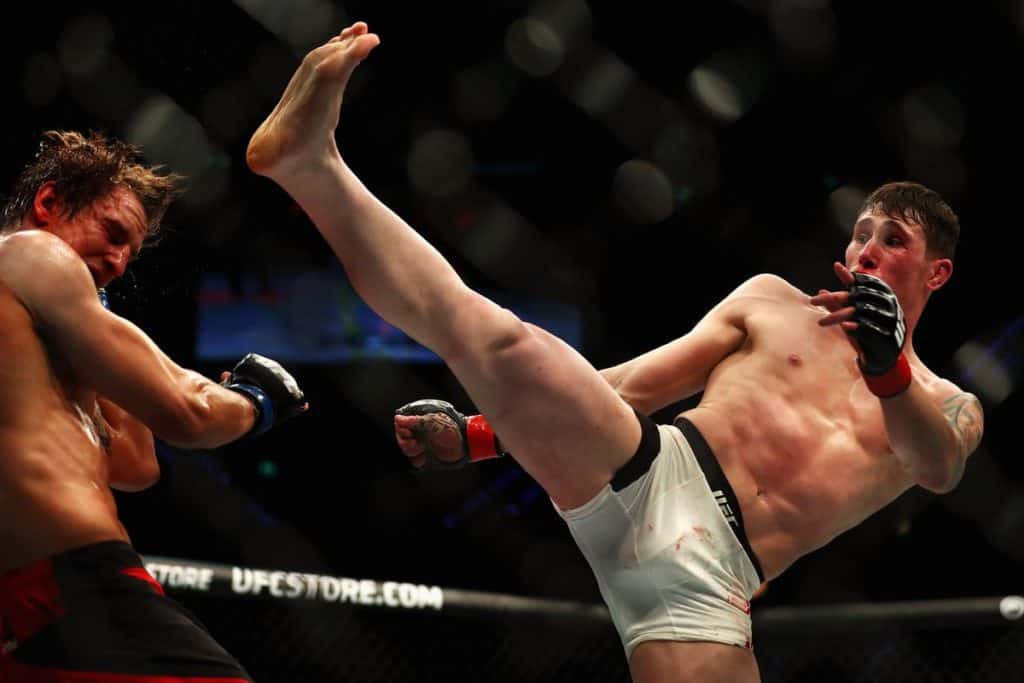 Darren “The Gorilla” Till is another promising fighter who has already fought for the belt in the UFC welterweight division. Darren Till has an advanced Muay Thai background and has competed in countless Muay Thai fights. I believe he has some of the best Muay Thai clinch techniques in the MMA game today. Darren Till is a name to look out for in the future of the UFC, he has the size and length to bolster his awesome technical prowess. 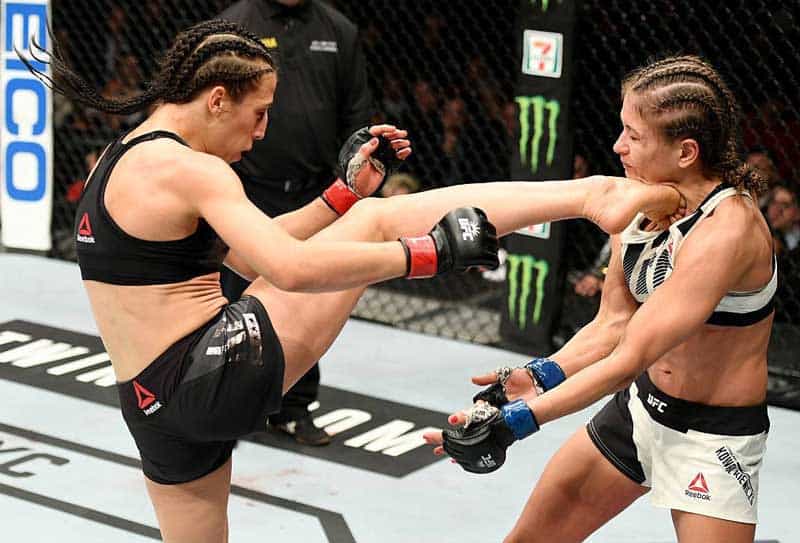 Joanna is a name you’ve probably heard of in both Muay Thai and MMA competition. A former UFC champion, Joanna has been known for her lethal and rangy Muay Thai strikes. She knows how to use her range well, and has pin-point accuracy in her lethal front kick (teep). I think Joanna has a chance to go down as one of the best Women’s UFC fighters in the history of MMA. Her Muay Thai technique is second to none, her clinch game also stands out as well. Joanna is ruthless, which is why we have her on our Top 10 best Muay Thai fighters list. 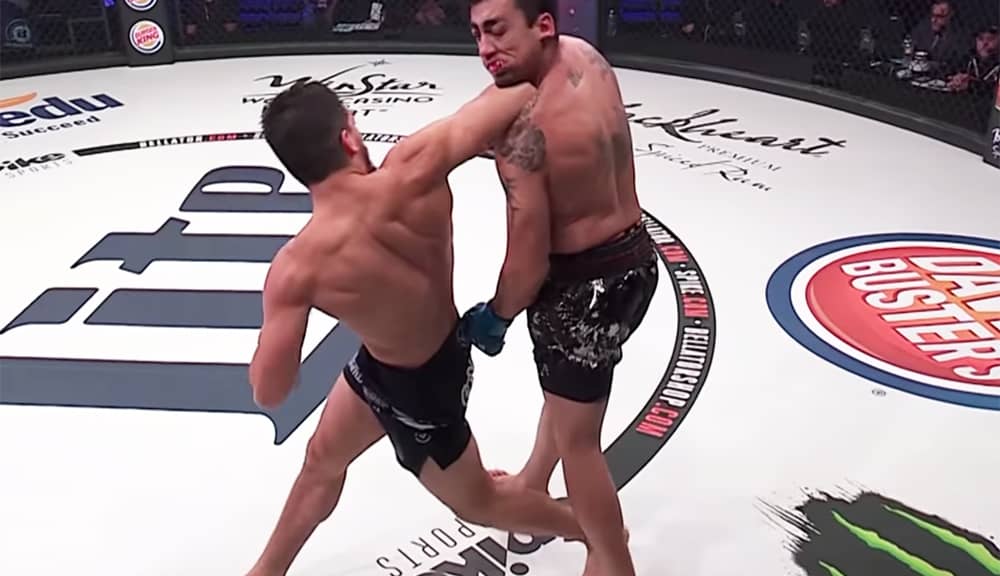 Gaston Bolanos may be a name you haven’t heard before, however we promise it’s one you’ll want to pay attention to in the future. Bolanos has some of the best Muay Thai in MMA today, what’s so amazing is that he transitioned from Muay Thai to Bellator MMA right away. It’s rare for Muay Thai fighters to have success in MMA right away because they must learn things such as take-down defense and grappling, however Gaston has had no problem transitioning into professional MMA right away. 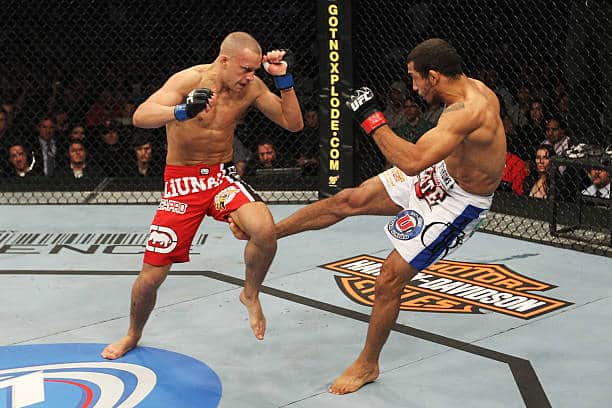 When it’s all said and done, Jose Aldo might go down as one of the best MMA fighters who even lived. It would be an absolute crime not to include him on our best Muay Thai fighters in MMA list. Jose Aldo is one of the main reasons I started training both Muay Thai and MMA technique, he stands out above many other Muay Thai fighters in MMA. I think almost every fan can admire his low-kick technique that has allowed him to completely dominate many fights inside the octagon. I’m not sure how much longer Jose Aldo will be in the octagon, however I know I’ll cherish every moment of it while it lasts. 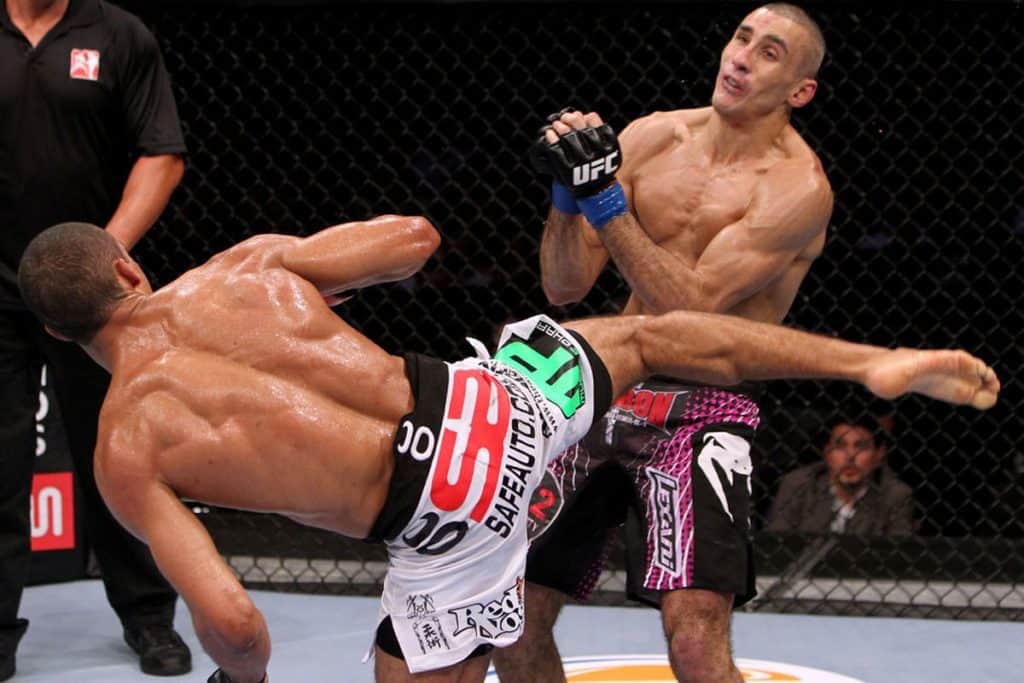 Edson Barboza may have the best pure Muay Thai technique on this entire list. His spinning wheel kick knockouts are an amazing sight to see. He is a fighter who uses his range very well, a thing Muay Thai fighters are known for. Having the ability to strike from a far distance makes Edson Barboza a very dangerous fighter inside the octagon. His flying knee knockout was one of the most intense knockouts I’ve seen in a long time. The one thing that fight showed me was that Barboza isn’t afraid to take a hit in order to get the knockout. 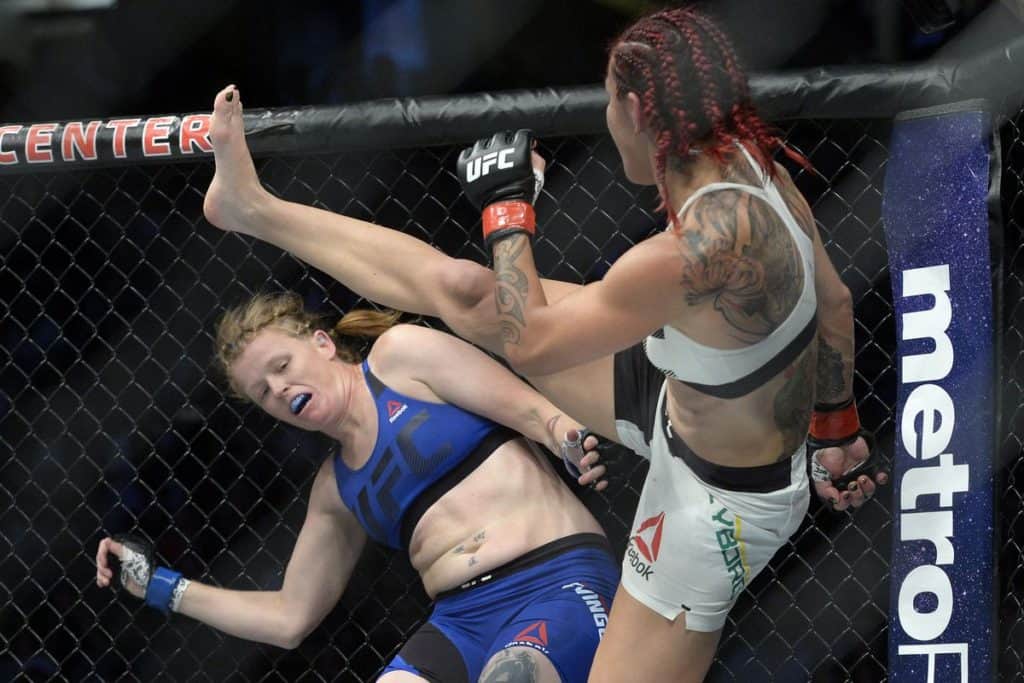 Many people reading this right now are terrified at the thought of fighting Cris Cyborg in the octagon or ring.. and you should be, she’s a savage. What makes Cyborg so powerful is not only her impressive strength and speed, but also her amazing Muay Thai technique. Cyborg has trained with Phuket Top Team in Phuket, Thailand, and has developed a great Muay Thai technique along the way. I believe she is one of the best Muay Thai fighters in MMA today, Male or Female. 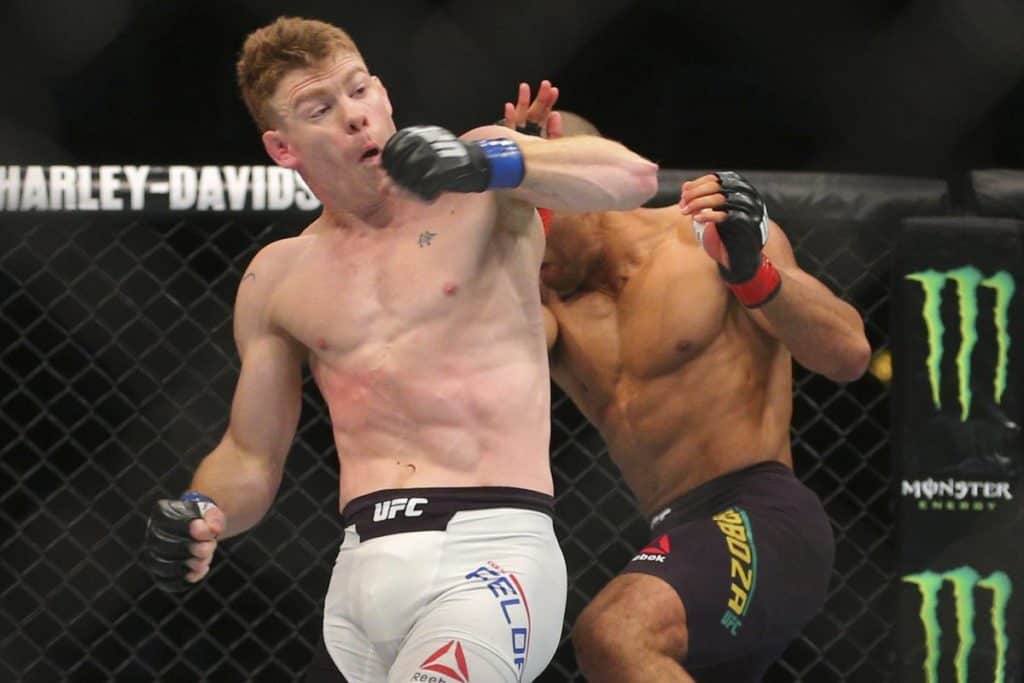 Paul Felder may be a name you haven’t heard before, however he’s one you should follow if you love bone crushing elbows from the clinch. Felder has absolutely amazing Muay Thai technique, he also trains with Cowboy Cerrone (go figure). I think Felder may be one of my favorite fighters to watch because he’s always going to be willing to stand and trade. His Muay Thai technique from the clinch is lethal, I would NOT want to be on the receiving end of one of his elbow strikes. I believe Paul Felder is one of the best Muay Thai fighters in MMA today. 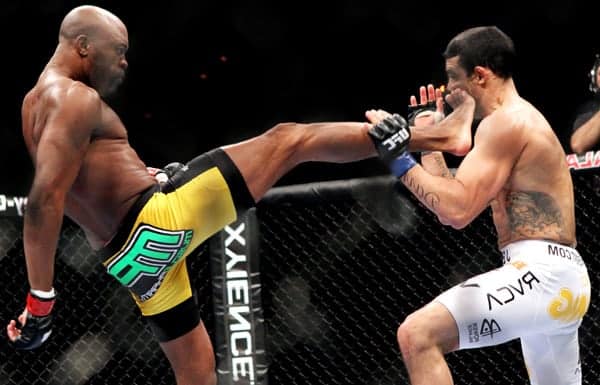 Anderson “Spider” Silva, or better known around these parts as the GOAT (Greatest Of All Time), has some of the best Muay Thai striking this world has ever seen. Many people debate whether or not Silva’s technique is traditional Muay Thai, however he credits his creative striking from his Muay Thai training in the past. I believe Anderson Silva is one of the best Muay Thai strikers to ever live, as well as being one of the best MMA fighters to ever live. He knows how to use his range to an advantage, and that’s something all Muay Thai fighters can learn from. 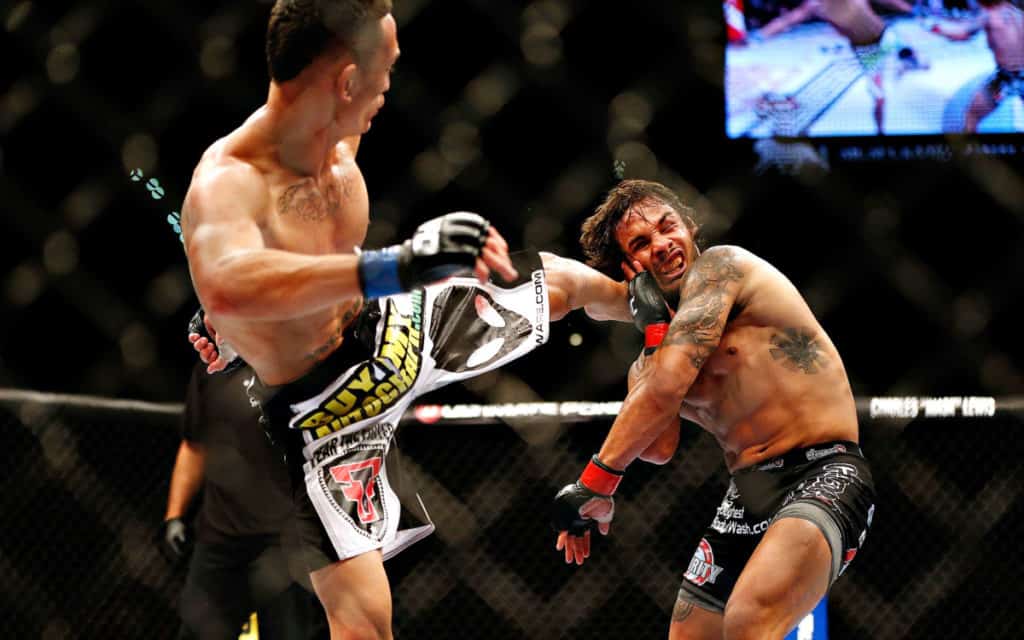 Max Holloway is one of the youngest UFC fighters to become a world champion. He shows amazing stand-up technique that he credits to Muay Thai training and all of those scraps in Honolulu, Hawaii when he was younger. Max uses his range very well and is capable of knocking out almost anyone in the UFC’s featherweight division. I believe Max Holloway has the ability to become one of the best MMA fighters to have ever lived if he continues winning in the octagon. I never miss a Max Holloway fight because I know there will always be some great Muay Thai technique shown.

So Who Is The Best Muay Thai Fighter In MMA?

Up and comers like Valentina Shevchenko show that Muay Thai is one of the best martial arts to base your MMA style around. It’s amazing to see Muay Thai fighters transition to MMA and have great success, and vice versa I love watching MMA fighters compete in Muay Thai or Kickboxing fights as well.